Having discovered the musical potential of their son early on, Jeff’s parents encouraged him to develop it further by providing him with his first piano and music lessons. Since then, Jeff has taken up saxophone, guitar, and developed his voice to accompany his piano playing. Now predominantly a singer and piano player, he has earned repute as a duelling piano player based out of Ottawa as well as a member of the southern rock groups The Cooper Brothers and Silver Creek.

After the release of his blues-inspired, self-titled debut album in 2007, Jeff appeared at numerous festivals opening for various acts including Taj Mahal, Colin Linden, Sonny Landreth, and The Downchild Blues Band.  In June of 2012, Jeff released his second full length album entitled "Let It Show", and has since opened for Norah Jones on the Main Stage of The Ottawa Bluesfest (July 8th, 2012). Jeff's third album is expected to be out by the end 2021.

Currently, Jeff is gigging full time in and around Eastern Ontario with various groups such as his duo "Beats'n Keys" with Jamie Holmes on drums. This duo is joined by JUNO nominee, JW-Jones, to form the blues power band, "HOROJO Trio" - who competed and won the International Blues Challenge held in Memphis in 2020 via the Ottawa Blues Society). They are currently promoting a Kickstarter campaign to help get their debut album out into the world. To pledge go to https://horojotrio.com. Along with celebrating 10+ years as the newest singer/guitar/keyboard/sax player of The Cooper Brothers, Jeff has also found himself featured in a project called, "The Commotions" - a BIG soul band - which consists of members including: Brian Asselin and Rebecca Noelle. Jeff is also a lead singer in two other projects lead by the talented trumpet and band leader, Ed Lister; "Sly High" is a tribute to Sly and the Family Stone, which has found itself on various festival stages and casinos in Ontario. The second, is a fun party band available for hire to get your dance floor moving known as "The Rock Steadies." All the while, he's been helping with session work, virtual gigs and songwriting for a new solo album, titled, "Dream Job" which is now available for pre-order at https://www.jeffrogers.ca. 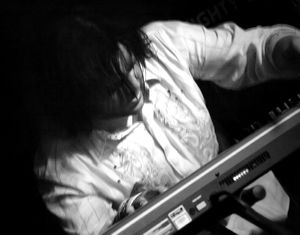 Jeff Rogers, simply stated... is one of Canada's greatest talents as far as I'm concerned.

Jeff is a friendly, low key and incredibly talented musician who's on stage presence is quite the contrast from the laid back individual he truly is.

When he performs, he is in complete control with masterful command of the keys and strong vocals that catches anyones attention within earshot. This guy, he's just GOT IT, The IT factor, whatever you want to call it...he possesses it.

Jeff is backed by an incredibly talented band that are versatile in many different genres, very much like himself. I have seen them perform on many different occassions and I find them just as enjoyable as the last time I checked em out. I have introduced many of my friends and listeners to his music and he never disappoints.

Not only do I talk the talk, but I walk the walk... having played, and continuing to play Jeff Rogers tunes on regular rotation @ DAWG FM, where I serve as the Music Director and Afternoon Drive Personality. He will also be part of DAWG FM's second annual CALABOGIE BLUES AND RIBFEST which has boatsed JUNO and MAPLE BLUES AWARD talent, such as David Gogo, Monkey Junk, Steve Strongman and Jack de Keyzer.

He's currently working on his latest album, which I have had the good fortune to preview... and its obvious to me, that he's a motivated, goal driven artist who is always looking to surpass his previous performance, whether it be a live performance, or studio recording.

Jeff Rogers is a phenomenal performer.


"It's one thing to be blessed with natural talent, it's another thing to nurture it and watch it grow.
Jeff is a born musician who just keeps working harder and getting better all the time."


"Jeff Rogers was always a man, musician and talent beyond his years and still is. I first encountered him and his music thru several guest performances on the Doc and Woody Show on CHEZ 106.1fm in Ottawa.
His delicately textured ballads may seem a stark contrast to his roving, rambling, rollicking blues/rock offerings but that just shows us the scope of Jeff's gift.

I'm not alone in this world, either, when it comes to an appreciation of Jeff's innate ability to fill the room with people, fill a void as a guest musician in a band ( .. I site The Cooper Bros. as just one example) or fill your head full of wonderment with his lyrics and playing ability.